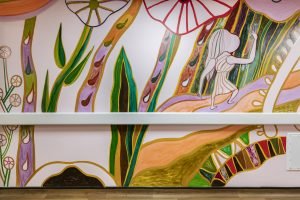 Artist Tim A Shaw and curator Niamh White founded Hospital Rooms after a close friend was sectioned and admitted to a mental health hospital. On visiting her, they were shocked to find that the hospital environment was cold and clinical at a time when she was so vulnerable. Having each worked in the art world for over a decade, they commissioned Nick Knight, Gavin Turk, Assemble among other world class artists to work with patients and staff to create site specific artwork for the ward. The project received national press attention and Hospital Rooms has been inundated with requests for projects ever since.

So far, Hospital Rooms has completed 20 acclaimed projects, completed in some of the most challenging mental health settings. They have worked with everyone from adolescents in severe mental health crisis to older people with dementia as well as Psychiatric Intensive Care Units and longer-term locked rehabilitation environments.

‘Hospital Rooms is one of those rare initiatives that combines seamlessly first- rate artists and real engagement with the patient and caregiver community. Their work goes beyond mere pleasant decoration to transforming austere patient holding areas into nurturing and healing environments, respecting not only the art and the science, but the essence of compassion which unites the two.’

We met up with Tim in London and he shared some insights about the process and impact of his work: 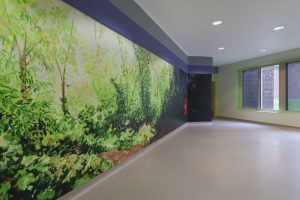 Our workshops with patients and staff are an integral part of the Hospital Rooms process, going on to inform the unique and responsive works created for the unit. The artists have the opportunity to work collaboratively with, and get to know, the NHS unit community before creating the artwork.


A quote by our head of research, Phoebe Eustance, which gives a good example of impact on a patient and ward:

“The work we do at Hospital Rooms is organised around the idea of collaboration between artists and service users, and it is why artist-led workshops are such a vital part of the process before producing a permanent artwork.

Installing the completed work within restrictive, locked mental health units can be challenging, requiring multiple stages of negotiation, safety requirements and approval that can last for months. At Northside House however, we were completely blown away when after finishing the three artwork installations on Catton Ward, we noticed that two new artworks had appeared on the ward, created independently by a service user. For such initiative to be taken, with full support and trust from ward staff was described by the NHS trust leadership as being ‘absolutely unprecedented in secure services’.

The service user was inspired to create these two paintings after seeing Carl Rowe and the Hospital Rooms team create the ‘BE’ artwork in the communal area. From the techniques he used, you can clearly see the painting skills taken from observing each installation in progress and from talking to the team – underpainting, masking and attention to detail with the application of paint. The choice of colours in the service user’s ‘ambition’ work mirrored Rowe’s lettering in ‘BE’ and the oscillating abstract shapes in the bedroom corridor borrowed Cara Nahaul’s yellow and Naomi Harwin’s dark blue from their respective installations. These new and unanticipated additions to the project represent why we do what we do and the need for projects like this in locked and secure mental health services.Working alongside acclaimed artists in the workshops and conversing during the installations can challenge existing hierarchies and empower service users to engage with art and creativity on their own terms.

Seeing someone so inspired by our project to commit their time and space to making their mark and showing creativity in this way takes this even further than we thought was possible in this environment. The visibility of service users’ works builds on the idea of ownership and involvement in creativity that goes some way to dismantling notions of elitism in art and how art, in fact, can be created by all and for all. For Hospital Rooms, this is the ultimate outcome.”